Masked ion beam lithography (MIBL) is a proximity printing technique where a beam of energetic light ions (hydrogen, helium, or lithium) floods a stencil mask and transmitted beamlets transfer the mask pattern to resist on a substrate. It is a high throughput, high resolution printing process whose main advantages include negligible proximity effects and the near absence of diffraction. Ultimately resolution depends on the quality of the mask, which today is ~75 nm for high density silicon stencils. 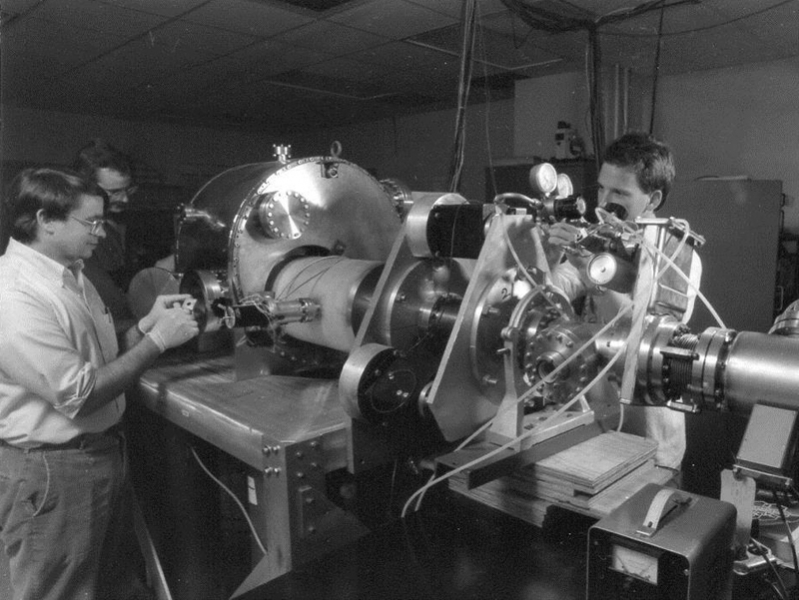 The above image shows early experiments (ca 1990) on a MIBL tool donated to the University of Houston by Texas Instruments and Electron Beam Corp. Atom beam lithography (ABL), using neutral atoms instead of ions, preserves the advantages of MIBL for nanoscale printing yet is immune to artifacts caused by ambient electromagnetic fields and/or charging of the mask and wafer. It is ideally suited for printing on insulating substrates and those with aggressive 3-D topography. Its resolution limit is well below 10 nm.

Figure 1 shows the key elements of Chrysalis, an atom beam proximity lithography tool arising from the metamorphosis of charged He+ ions into neutral He atoms. It was developed in part, with support from NSF grant DMI-0521523, the Cullen Foundation, and the Texas center for superconductivity. Helium ions are extracted from a multi-cusp source and accelerated by a 3-element electrostatic lens. Space charge repulsion in this high current beam prevents the formation of a true cross-over; instead, it converges to a waist of minimum diameter, then diverges downstream. For ABL, ions can be neutralized by charge transfer scattering, Figure 2, in a differentially pumped, high pressure cell charged with room temperature helium gas. Residual ions are removed with an electrostatic deflector (Hughes Research Lab) and a pure beam of energetic neutral helium atoms drifts toward the exposure station. We have made significant improvement in source cooling that enables continuous operation at more than 700 W combined filament and discharge power. Experimental knife-edge ion data shows that the asymptotic rays far from the beam waist appear to emanate from a virtual source about 40 cm beyond the waist. The virtual source has a Gaussian emission profile whose diameter and brightness are, respectively, 82+10 mm [2s] and 2,140 A/cm2-sr at 30 keV. The average current density at the exposure chamber, Figure 3, is 283+3 nA/cm2 over a circular exposure field 5.0” in diameter. Penumbral blur is 100,000 times smaller the the distance between the mask and wafer, thus providing exceptional depth of field. In concrete terms, the exposure time for Poly(methylmethacrylate) resist at twice the critical dose is just 10s and 100 nm mask features can be projected to a substrate 1 cm distant. Figure 4a shows the source hardware installed in the NMC. The 10M beam line terminates in a vibration-isolated exposure chamber, still under construction, as shown in Figure 4b. The isolation system uses a pair of welded-bellows to isolate the exposure chamber from the beam line, piezoelectric isolators to attenuate low frequency floor vibrations, and pneumatic isolators to attenuate the high frequencies.

Figure 2: In charge transfer scattering, an energetic helium ion is neutralized by an electron during a close encounter with a thermal helium atom. Kinetic energy is conserved in resonant reactions and scattering angles are very small. Thus, virtual source size, hence lithographic blur, of the neutral atom beam can be nearly as small as for the beam of parent ions.

Figure 3: Beam profile for 30 keV He+ ions. PMMA resist exposures at twice the critical dose take ~ 10 s and the current density is uniform to 1% over a circular exposure field 5" in diameter. 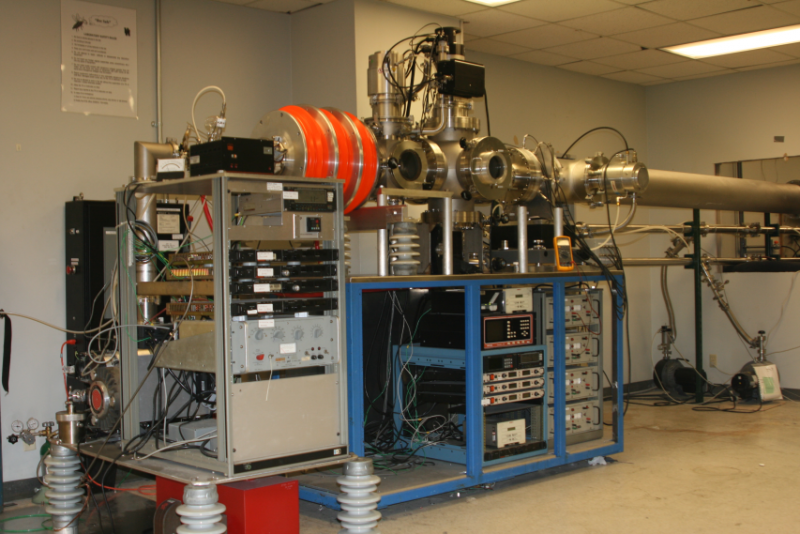 Figure 4a: Source hardware of Chrysalis. Ions are extracted from a multi-cusp ion source, accelerated and focused to a beam waist near the center of the large stainless steel cross where is it neutralized by charge transfer scattering. After removing the remaining ions with an electrostatic deflector, neutral particles drift to an exposure station in the next room. The total length of the drift section is ~10 M. 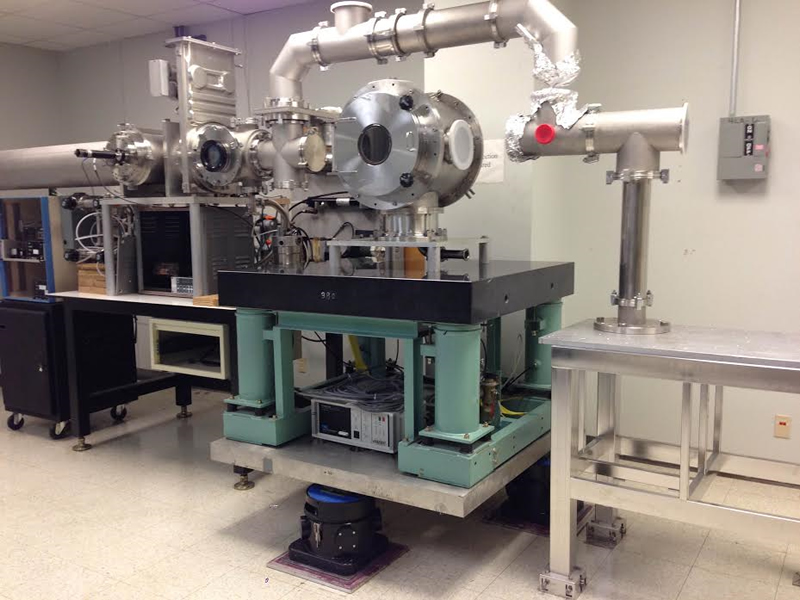